East Madison, NH – King Pine Ski Area at Purity Spring Resort is celebrating 50 years this season. The family-oriented ski resort, located in New Hampshire’s White Mountains, is just 15 minutes south of North Conway, NH and has been owned and operated by the Hoyt family since 1962.

Known for its family-friendly atmosphere, affordability, and consistent snow conditions, King Pine offers exciting terrain for all abilities and has been a tradition for families throughout New England for 50 years. 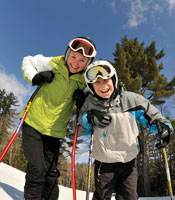 The first trails were cut for King Pine Ski Area in 1962. The ski area was appropriately named after the Eastern White Pines on the property that the King of England had marked with a blaze called The King’s Broad Arrow in the 1700s.

Though the ski area was established in 1962, skiing at that time was not a new concept for Purity Spring Resort. Skiing at the resort began in 1938 when a rope tow was installed near Bald Ledge behind the original Inn at Purity Spring. During that winter, Milt Hoyt, son of property founder Edward E. Hoyt, brought small groups of students to the Inn during winter weekends to try the relatively new sport of skiing. In 1944, Milt left his teaching position in West Hartford, Connecticut, to develop Purity Spring into a year-round business. He opened the inn and the camp to guests and hosted ski camps during school vacation weeks. Celebrating 74 years this February (2012), King Pine and Purity Spring’s Ski & Snowboard Camp is known as the longest running ski camp in the country. 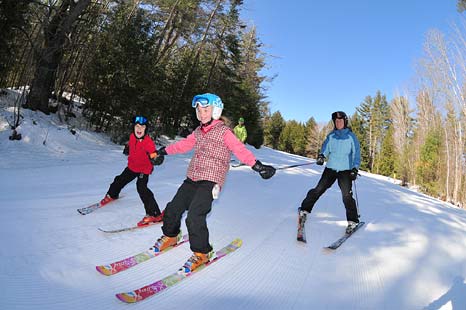 Skiers and riders can double their skiing dollars at King Pine on Tuesdays, Wednesdays and Thursdays (non-holiday) with “2-for-1” deals for All-Day or Night skiing and riding. Families will also love The Moonlight Family 4-Pack, where a family of four can ski or snowboard at King Pine any Saturday night (or any holiday period night) under the lights from 4-9pm, including free family racing (Saturday nights only) for only $54!

King Pine and Purity Spring Resort, located on Route 153 in East Madison, NH, are owned and operated by the Hoyt family and have welcomed guests since the early 1900’s. Additional information can be found at www.purityspring.com or by calling (800) 373-3754 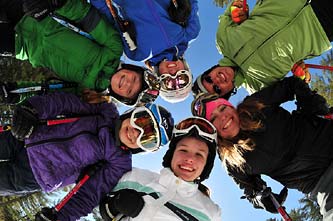