The New Hampshire microbrew industry has been gradually growing over the past several decades. This is due to the fact that New Hampshire has some wonderful microbrews. While some have been around for decades and are filled with history others are still fairly new and trying to become more well known. There are some real surprises that await you as you discover New Hampshire Brew Pubs and Microbreweries in nearly every region of the Granite state.

To promote your business in NHLiving.com – New Hampshire’s Internet Magazine, please contact us. 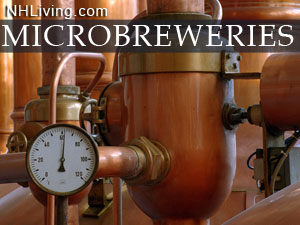 Throughout the ages cultures from all over the globe have brewed their own version of beer. While no two are alike their are categories that for the varying types. This ranges from pale to black and sweet to bitter. It is also defined in part by if the yeast is top or bottom fermenting and the types of hops, barley , and other seasonings that are put into it.

Ale
Ale is an ancient word for a fermented alcoholic beverage obtained mostly from malted barley. Prior to the Netherlands introducing hops to England in the 15th Century the term ale was used to refer to unhopped fermented drinks. The term beer was used to describe a brew that had used hops. Generally speaking this distinction is no longer used. Ale is different from other brews because it is a top fermenting ale so the yeast tends to ferment quicker, convert less sugar to alcohol, and produce more esters than the lager yeasts. This is what causes them to have their sweeter and fruitier taste. Their are several different kinds of ale such as Old Ale, India Pale Ale, Mild Ale, Bitter Ale, Pale Ale, Brown Ale, Scotch Ale and Belgian Ale, Porter and Stout.

Altbier
German word for “old”. Altbier usually means a copper-colored, clean-tasting German Ale of the style especially associated with the German city of Dusseldorf. A smooth all malt beer with a well rounded hop character. For sociable drinking, or with appetizers of strong cheese of coarse sausage. The German glass used is similar to that used for a highball. Ideal serving temperature is just under 50F (10C).

Bock
Strong Lager served as a warming beer in late winter, early spring, or autumn, depending upon the part of the world. Color varies. Classically served at not less than 48F; 9C, from a stoneware mug. In Germany, sometimes served with the seasoned veal sausage Weisswurst.

Brown Ale
In Britain there are styles of varying degrees of sweetness. Initially brewed to compete with the pale ales. These go well with desserts or nuts. Belgium has a sweet-sour type made around the town of Oudenaarde. This type is more often served as an aperitif. Both are served at 55F; 13C.

Cream Ale
A very mild, sweetish, pale-golden to golden beer with a hint of fruitiness, fermented at warm temperatures with either “true” ale yeast or hybrid/lager yeast. Made in the North America as a response to the public’s increasing desire for lager. A sociable brew. Serve at 45-50F; 7-10C.

Lager
Lager originates from the German word lagern which means “to store” and refers to the method of storing it for several months in near-freezing temperatures. A lager is usually used to describe bottom-fermented brews of Dutch, German, and Czech styles. Lagers can range from sweet to bitter and pale to black. However, most are a pale to medium color, have high carbonation, and have a medium to high hop flavor. Their are several strains of lager one of the more well-known is the pilsner or pilsener.

Light Ale
In England, an alternative term for a bottled Bitter. In Scotland, a dark Ale of low gravity. Not intended to imply a low-calorie brew. For sociable drinking.

Oatmeal Stout
Once vanished now revived, this beer has a firm body that is smooth and silky. It has a chocolate-coffee flavor with a hint of nuttiness. Most are slightly sweeter than dry, but all fall in-between.

Pilsner or Pilsener
The pilsner style of beer was developed in Plzen (Pilsen in English), a city in what is now the Czech Republic. It is made with neutral and hard water and tend to golden in color and having a dry, crisp, and somewhat bitter flavor. Pilsner stands out from the other lagers due to its more distinctive hop taste.

Porter
Porter is a style of ale which has a malty aroma, hop bitterness, and a bittersweet chocolate flavor. It is generally strong and dark and brewed with soft rather than hard water.

Stout
Stout is a dark beer made using roasted malts or roast barley. It is generally darker, fuller bodied, maltier, and hopier than other ales. Stout Ale originated in Ireland as a variant of porter beer.