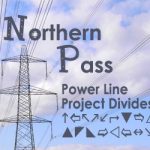 The task getting freshly produced electricity from Quebec to Boston – where the electricity can be sold on the open market, is a big project. The stakes are high, the need is now, but this “green” electric power plan is creating controversy here in New Hampshire and throughout northern New England. We hope you will consider exploring all sides of this issue and share your thoughts, ideas and suggestions. Ask us about visiting NH. To feature your business, contact us. 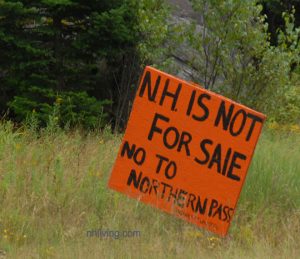 Anti-Northern Pass Signs are a common sight in northern NH

New Hampshire residents are actively discussing the Northern Pass Project. Some landowners have already struck a deal to sell or lease land for the towers – others have sold or granted land to The Society of the Protection of New Hampshire Forests in an attempt to thwart or delay the project. Whatever the outcome – it is likely that not all NH residents will be satisfied.  NH residents are being urged to support the project by PSNH (Public Service Company of New Hampshire) , the states largest supplier of electricity. PSNH electric rates are presently among the highest in the nation.

Thank you for sharing your thoughts about the Northern Pass Project.