From a rather peculiar beginning the Red Hat Society, or RHS, has grown to become the largest women’s social organization in the world.

Founded in 1998 in Fullerton, California, this social club for mature women (age 50+) now has more than 24,000 chapters in the United States as well as other countries. The Red Hat Society is well represented throughout New England. Read on to find out how you too can become a “Red Hatter” Ask us about the Red Hat Society or share comments. To feature your business, contact us.

Red Hat Society founder, Sue Ellen Cooper, credits the start of this women’s club to a simple poem that reads;

“When I am an old woman I shall wear purple

With a red hat that doesn’t go and doesn’t suit me.”

The poem, called “Warning” was written by Jenny Joseph. In 1997, Cooper gave a friend a 55th birthday gift consisting of a red fedora hat purchased a year earlier at a thrift store along with the poem book.

This gift-giving practice of red hats and the poem book “Warning” continued and eventually led to a social gathering – a tea party of women in bright red hats. 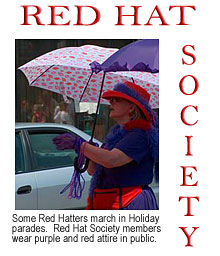 The gatherings garnered national attention, initially in a magazine called Romantic Homes. The Red Hat Society was even featured in an episode of FOX TV’s “The Simpsons”. The early growth, however, came primarily through word-of-mouth and viral marketing through both the internet and email.

The Red Hat Society’s primary mission is social. The organization encourages women to get together and have fun. Building friendships, creating new bonds, fulfillment, and fitness. This civic organization is not a sorority or a volunteer service club. The Red Hat Society does no fundraising and there are no initiations.

A founder or leader of a local chapter is usually referred to as a “Queen”. Members are called “Red Hatters”. Members 50 and over wear red hats and purple attire to all functions. A woman under age 50 may also become a member, but she wears a pink hat and lavender attire to the Society’s events until reaching her 50th birthday. She is referred to as a “Pink Hatter.”