What are they talking about? Get to know some basic terminology of today’s snowboarder. Ask us about Snowboarding in NH or share your NH snowboarding comments. To feature your New Hampshire business, contact us. 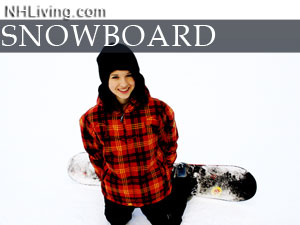 Snowboard Culture has its own unique flavor, including music, apparel and language. Here are a few of the more interesting terms used by snowboarders.

Alley-Oop
Any maneuver in the halfpipe where you rotate 180 or more degrees in the uphill direction.

Regular
Riding with your left foot in the forward position

Fakie
Riding with your right foot in the forward position.

Backside Rodeo
Turning your back downhill when coming off a jump, flipping 540 and landing fakie or rotating 720 and landing regular.

Boned Out
Over-exagerating body positions when doing tricks, often giving the legs the appearance of being extended or stretched to the maximum degree.

Bonk
Hitting an object with your snowboard.

Duck Foot
A riding stance where heels are together and toes point outward away from one another.

Grind
To ride objects such as boxes and handrails with a snowboard.

Hammer
To ride as hard as possible.

Ollie
A hopping motion achieved by lifting first the front foot, then the rear foot before springing off the tail of the snowboard.

Nollie
A reversed Ollie, leading with the rear foot first.

Rolling Down the Windows
The spinning of your arms wildly in the air in an attempt to regain balance.