Squam Lake is located in the heart of the picturesque Lakes region of New Hampshire, near Holderness and Lake Winnipesaukee. Squam Lake was the filming location for the 1981 film, On Golden Pond, starring Katherine Hepburn, Henry Fonda and Jane Fonda. It is also home to to the well-loved Squam Lakes Natural Science Center, a zoo and science center founded in 1966 that focuses on ecology and education. Ask us about Squam Lakes or share your Squam comments. To feature your business, contact us. 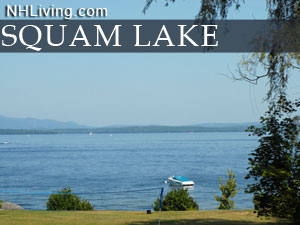 Squam Lakes is known as one of the most peaceful and pristine in the country. The fog rises from the water early in the morning, loons fill the air with their haunting call.
– Conde Nast Magazine

Squam Lakes, located just 40 miles north of Concord, are natural, spring-fed bodies of water consisting of a small and large lake connected by a channel. The Squam Lakes are not only rich in natural beauty but history as well. Squam Lakes’ earliest inhabitants were from the Abenaki nation of the Algonguin Federation of Indians.

Originally, they referred to Squam as Keeseenunknipee, which meant “the goose lake in the highlands”. The white settlers that followed shortened the name to Casumpa, Kusumpy and/or Kesumpe around 1779. In the early 1800’s, the lake was given another Abenaki name, Asquam, which means water. Finally, in the early 1900’s, Asquam was shortened to its present version, Squam.

Though the lakes’ name has seen many changes, the Squam Lakes area has seen relatively few. Despite being located only a couple of hours from major metropolitan areas, Squam has managed to maintain its pristine and undeveloped landscape.


The lack of transportation to the Squam Lakes at the turn of the century helped the area to stay relatively undeveloped. With the railroad stopping in Ashland, commercial activity remained limited directly around the lakes. Today, the interstate highway brings visitors into Ashland, where the center of commerce exists for the Squam Lakes area. Holding onto the history of the area, many camps on the lakes date back a century and discretely line the lush shoreline. Families have been coming for vacations for generations and many make the lakes their year round residence upon retirement. 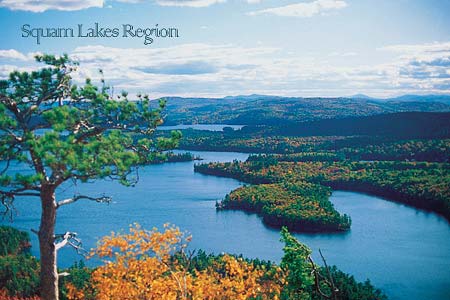 While the islands on the lakes are part of its unique landscape, the coves are quiet and a perfect haven for nesting loons and other wildlife.
The unspoiled beauty of Squam Lakes is what continues to bring visitors here today. Once they are here, the region hosts a variety of activities for all seasons including hiking, camping, swimming, sailing, canoeing, kayaking, fishing, golf, tennis, and mountain biking.

On the lake, natural and stocked fish include trout, bass, and salmon. For the less sports minded, there are a variety of wonderful restaurants and interesting shops in the area for visitors to experience. Whether your preference is a quaint inn, waterfront cottage, campground or motel, the Squam Lakes area boasts a variety of unique lodging opportunities. Most of New Hampshire’s major attractions are less than an hour away making the Squam Lakes area an ideal location for day trips.

The Squam Lakes region is home to the Squam Lakes Natural Science Center, which features four self-guided trails including the Gephart Trail with native New Hampshire wildlife in natural woodland enclosures. If you want to get onto the Squam Lakes and you don’t have your own vessel, tour boat companies offer guided tours of the lakes. Scenes from On Golden Pond including the location of the famous back flip by Jane Fonda into the lake or Audrey Hepburn running into the marina, are recognizable sites on the tours.

In the spring, the annual ritual of tapping maple trees and boiling the sap into dark maple syrup abounds, while the fall sees Squam Lakes wrapped in the incredible colors of the New England foliage. It is not by accident that the Squam Lakes area is in pristine condition, but due to the unique efforts of dedicated organizations and individuals, who believe that preserving the watershed is essential for the public’s enjoyment of this beautiful area. The natural beauty of the Squam Lakes area continues to bring visitors back year after year.

Did we miss something?