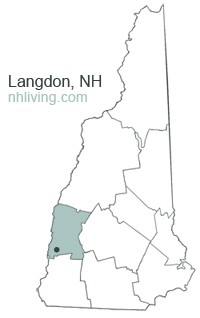 Carved out of several adjacent towns, Langdon was named in honor of Governor John Langdon. Governor Langdon’s political career included: delegation to the Constitutional Convention; serving on a committee with Benjamin Franklin and John Adams to secure military supplies for the American forces; serving as a member of the State senate; serving as speaker of the House of Representatives; serving as president of the Senate in the first United States Congress; supervision of the canvass of electoral votes to elect Washington as President; and eight terms as Governor of New Hampshire.

To share any Langdon, NH information with us, please contact us. Learn more about advertising in NHLiving.