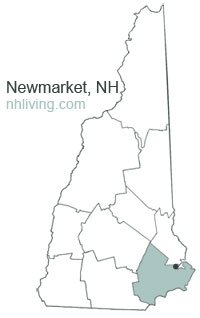 One of six towns granted by the Massachusetts government in the last year of the reign of King George I. It started as a parish of Exeter, and was granted full town privileges by legislature in 1737. It was probably named for Newmarket in County Suffolk, England. The Lamprey River, running through the town, was named for John Lamprey, whose name was Saxon for a woodland enclosure where peace is to be found. For a while, the town was called Lampreyville. Newmarket was a center of the New England shipping trade with the West Indies.

To share any Newmarket, NH information with us, please contact us. Learn more about advertising in NHLiving.