Within the past 100 years, New Hampshire has seen a significant decrease in the number of working farms within its borders. Sherri Towle of Thistle Ridge Farm in Dover, NH states that, "the turkey business is not decreasing in New Hampshire; however, it is more prevalent in the southern portion of the state simply because corporate companies have taken over in that section." Towle further states, "if people were more aware of local turkey farmers in their areas, it would keep the smaller producers going."Ask us about Turkey Roasting or share comments. To feature your business, contact us. 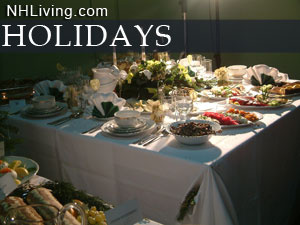 Fortunately, however, New Hampshire remains home to many self-owned producers of various breeds of high-quality turkeys, including Giant White, White Bronze, Royal Palm, Red Bourbon, and Black Spanish. Unlike larger corporations, most turkey-raisers in the Granite State are opposed to the use of any growth hormones or antibiotics; most opt instead for a diet of straight grain and water. The only biological amplification that is given to the birds (in some instances) consists usually of the so-called “medicated diet,” i.e., a high-protein diet coupled with 100% organic vitamin supplements. The high-protein regimen proves to be highly beneficial to the Red Bourbon breed, which tends to be heavy by nature. Joe Morette of Henniker Saw in Henniker, NH emphasizes the value of the organic “Beer Diet”: “The results afford us to humbly offer the delicious “Top Shelf” Turkeys as the centerpiece for families and friends to come together and have a memorable Thanks-Giving day.”

While producers of beef place great emphasis on the lifestyle of the animal prior to butchering (i.e., sedentary vs. active), we are told that this is viewed by most as an incidental issue where turkeys are concerned. Being of a naturally lethargic and low-energy disposition, turkeys are not inclined toward physical exercise or exertion; however, self-employed turkey producer John Rathburn of Peterborough, NH states that “each bird should have at least 15 square feet of living space.” Rathburn states further that most turkey producers in New Hampshire keep their birds in a barn in the interest of safety. The rationale is that, when a turkey (being a primary example of “wild game”), is given too much freedom to graze, it will certainly get loose and end up disappearing in one way or another. After butchering, many soak the birds in cold water overnight before packing to insure freshness.

In terms of selecting the “best turkey,” turkey producer Barbara Hutchinson of Jocose Farm in Chester, NH recommends that shoppers select a bird with a broader breast–an attribute that suggests an abundance of white meat. Most agree that the sex of the bird is incidental–providing that it has been fed an organic diet. Joe Morette of Henniker Saw in Henniker, NH suggests that one try to locate early among birds that are raised “open range,” not in coups or limited area pens”–a point that seems to stand somewhat in opposition to the opinion of the majority–demonstrating that all turkey producers have views and reflections on their craft that are as individualized and unique as the birds they raise.

Did we miss something?