There is always something happening in New Hampshire Broadcasting. The TV business in the Granite state is dominated by Manchester’s Channel 9 (WMUR). WMUR is the only local statewide commercial television station. NH television stations bring local news, weather, sports and entertainment programming to the Granite State. New Hampshire is also served TV broadcasting from stations located in neighboring states. Many of the Boston MA TV stations are available over the air in southern New Hampshire, some are carried on CATV systems in the state. Vermont TV channels are also available along with several Maine TV stations. The far northern regions of New Hampshire can receive TV signals from Quebec, CA. Ask us about NH TV or share comments. To feature your business, contact us. 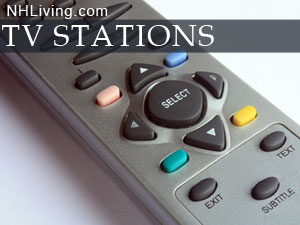 
“Where the News Comes First” is this TV stations slogan. An NBC affiliate with a sister station in the Plattsburgh, NY/Burlington, VT market. This station is owned by Hearst Television Stations – which also owns WPTZ, WMUR-TV, WCVB-TV, WMTW. The primary broadcast tower is located on Mt. Ascutney in Vermont. The station studios are located in a former motel building in Hartford, VT.

WBIN-TV – Channel 50
11 A Street
Derry, NH 03038
Ph: 603-845-1000
Web: www.wbintv.com
Carlisle One Media Inc.
“BIN-TV is an Independent Television station that is part of Bill Binne’s Carlisle One Media Inc. The station was formerly known as: WXPO-TV, WNDS-TV50 and WZMY-TV. The station is now airing syndicated programing. TV shows include:  Family Feud, Better, Maury, The People’s Court, and Cheaters. WBIN can generally be seen on Comcast cable channel 18 (outside of downtown Boston) and Verizon FiOS cable channel 6 (506 in HD). It is offered on cable systems throughout New Hampshire, southern Vermont and southern Maine. “Watch and See” is the station slogan – we will be looking for increased local programming – including High School and UNH sports. WBIN is now the only locally owned, locally operated TV station in the Manchester/Boston television market.

Did we miss something? Add your update or comment.