Quaint and rich with history, downtown Bethlehem NH is a vibrant community filled with the arts and live performances. Located in the heart of Main Street is Colonial Theatre, a seasonal May to October movie house that features live performances, art films, independent movies and documentaries. The Colonial Theatre was built in 1914 by architect Francis J. Kennard and features a distinct art deco style rarely found today in American movie houses – a subsect of Art Deco known as Egyptian Revival. Ask us about NH Movie Theaters or share comments. To feature your business, contact us.

Originally built in 1914 by hotelier Karl Abbot, Bethlehem’s Colonial Theater is the oldest continually operating theater in America. In 2000, a handful of concerned citizens joined forces and formed a non-profit organization, called Friends of the Colonial, to save the sadly neglected building from potential abandonment or worse, demolishment.

With no handicap access, water running freely through the building, rotten exterior walls, a collapsed marquee, and the prospect of a possible building collapse, the Friends acted quickly. The Colonial is slowly but surely being restored to its original glory, with all above issues addressed in addition to many other new features.

The long term goal of the Friends is the re-birth of the Colonial Theatre as a sustainable year-round regional cultural center. Over the last five years, considerable progress has been made in the pursuit of that goal. In addition to bringing the community a host of award-winning independent and foreign films, the Colonial also presents a varied range of live musical performances, film festivals and children’s theatrical productions each season.


One unique feature of the Colonial is its architectural style. Built between the Art Deco and Art Nouveau periods of design, the Colonial is one of only a handful of remaining Egyptian Revival theaters standing in the world today. When first built, however, the theater did not have any identifying Egyptian features on its facade, but rather a Victorian Baroque plasterwork. Due to exposure and the elements, the plasterwork has since disintegrated, leaving the Colonial a bit sparse looking.

As a tribute to its architectural roots, the Colonial is currently getting a newfacade – a hand-painted and historically-referenced mural, painted by volunteer members of a local arts group called the White Mountain Creative Guild. With such distinctly Egyptian features as lotus flowers and a winged solar disc, the Colonial is finally beginning to look like other Egyptian Revival theaters around the world, and is transforming into a beautiful showpiece of Bethlehem’s Main Street area. NH Living thanks the volunteers of the White Mountain Creative Guild and encourages everyone to help support the Arts in New Hampshire. 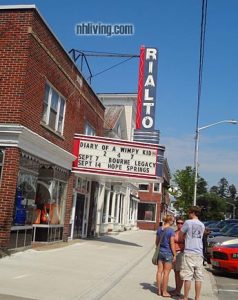 Other beautiful and historic cinemas and theaters in New Hampshire include The Rialto in Lancaster, Concord’s Capital Center for the Performing Arts, the Claremont Opera House, The Strand in Dover and the Ioka in Exeter. Explore all of New Hampshire’s Movie Theatres.