Old Man of the Mountain – Repair

Repairs on the "Old Man of the Mountain"

1958 Facelift Performed on the Old Man of the Mountain

The Old Man of the Mountain, once located in Franconia Notch, New Hampshire, was a series of five granite cliff ledges on the backside of Cannon Mountain that was first discovered in 1805 and collapsed in 2003. Today, a memorial is being built to the Old Man near the base of the mountain by a non-profit group. Old Man was first made famous by Daniel Webster, a NH statesman, and the formation went on to be memorialized in the writings of Nathaniel Hawthorne. Even after its collapse, Old Man continues to be the NH state emblem, and can be seen on road signs, on the NH quarter and on license plates. Ask us about visiting NH or share comments. To feature your business, contact us. 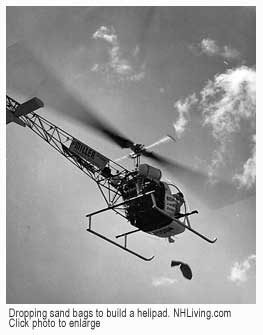 In 1958 a crack on top of the Old Man’s head was expanding, and Miller Aviation from Pittsburgh, Pa. was hired to haul men and supplies by helicopter to the top of the mountain to repair and waterproof the crack. The helicopter used to haul both men and materials was a Bell 47G-Franklin powered helicopter, which had a 200 horsepower engine.


One of the first problems encountered was a lack of flat area to land the helicopter, as the landing spot was too steep. They created a helipad with sandbags flown up in approximately 40 trips. Each flight had to be guided due to the small landing pad. David Carlton, the mechanic, can be seen guiding the aircraft, which Don Mabry is piloting to the helipad. 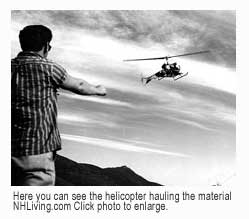 During this operation many problems were encountered. Several times the fog rolled in so rapidly the crew was stranded on top for periods of 3 to 4 hours at a time. The loads of heavy cement, waterproofing materials, large rods and turnbuckles required precision flying on the part of the crew. Even after building the helipad, the uphill rotor blade was approximately waist high from the ground and required entrance and exiting the helicopter to be limited to the front of the helicopter only. Although many problems were encountered, there were no accidents during the entire operation. 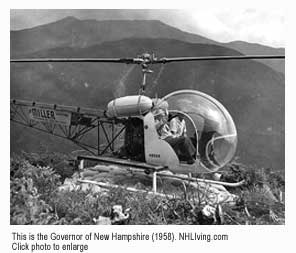 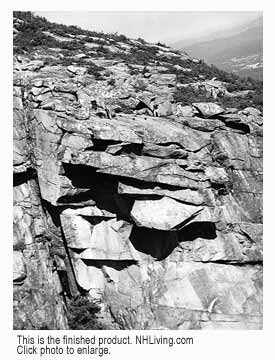 On a clear day, Lane Dwinell, the Governor of New Hampshire in 1958, flew up to observe the work being done on the Old Man. Engineers had estimated that if the rock was not sealed and repaired, it would have collapsed the following winter.

The last photo taken was a shot of the completed work. If you look closely you can see three men standing on top of what was the Old Man’s forehead. David Carlton said, “It was scary up there when you consider the 2,000 ft. drop if you slip and fall.”

The work that was done in 1958 helped to keep the Old Man of the Mountain up until May of 2003, when he could hold himself up no longer and fell. Click here to read the story of the Old Man vanishing.

More photos of the repair work done below. Click on each photo to enlarge. 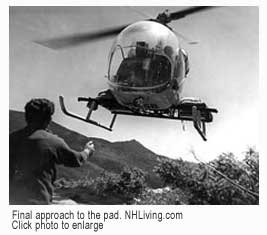 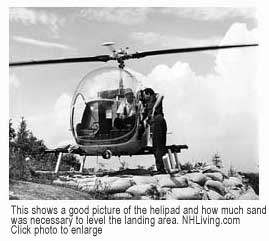 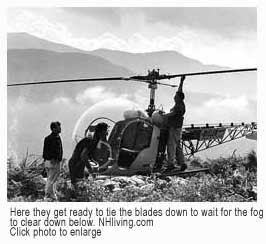 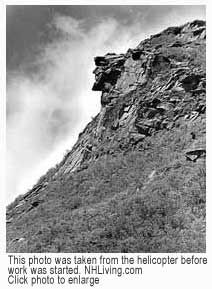