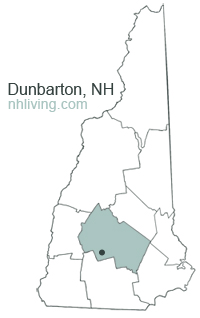 The town of Dunbarton, New Hampshire was first granted in 1735. Dunbarton was known as Gorham’s-town to soldiers returning from the Canada Expedition, and regranted in 1748 as Starkstown to Scotch-Irish settlers led by Archibald Stark. It was incorporated in 1765 as Dunbarton, named for Dumbartonshire in Scotland, hometown to Archibald Stark. Stark’s son was General John Stark, patriot of Bunker Hill and the Battle of Bennington, and his grandson Caleb was a famous industrialist who established textile mills in Manchester. The Dunbarton Town Forest and Stark Pond Marsh encompass dozens of miles of wilderness and protected areas of Dunbarton. Villages and settlements in Dunbarton include; Pages Corner, and Dunbarton Center. The Countryside Golf Club is located here.  Bodies of water in Dunbarton include: Gorham Pond, Kimball Pond, Long Pond, and Stark Brook.

To share any Dunbarton, NH information with us, please contact us. Learn more about advertising in NHLiving.