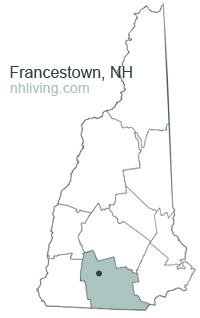 Named for Frances Deering Wentworth, wife of Governor John Wentworth. Situated on the Second New Hampshire Turnpike, the sole route between Boston and Vermont, the town once collected a toll of one cent per mile from traveling coaches and wagons. Francestown was also the site of a high-quality soapstone quarry, which was mined until the 1890s. Levi Woodbury was born here in 1798. Woodbury held some of America’s highest offices. He served as a U.S. Senator, Secretary of the Navy, Secretary of the Treasury, and a U.S. Supreme Court associate justice.

To share any Francestown, NH information with us, please contact us. Learn more about advertising in NHLiving.