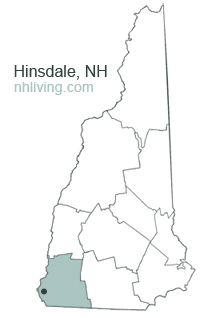 Tucked into the farthest southwestern corner of the state, Hinsdale, New Hampshire was named for Colonel Ebenezer Hinsdale in 1753. Colonel Hinsdale was from a prominent family in Deerfield, and he was once chaplain of Fort Dummer, an important trading post on the Connecticut River. He later enlisted as an officer, and then established the trading post at Fort Hinsdale, reportedly at his own expense. Today, Hinsdale has become a shopping and entertainment magnet. Wal-Mart is located just across the Connecticut River from Brattleboro, Vermont. Hinsdale has the oldest operating US Post Office in the country. The town has a land area of 14,497 acres. Hinsdale is bordered by the Connecticut River and Brattleboro to the west, Pisgah State Park – a vast undeveloped region to the east and Wantastiquet State Park to the north. The rolling hills and river valleys define the topography. The Ashuelot and Connecticut Rivers flow through Hinsdale. Recreational activities include; hiking, fishing, boating, snowmobiling, and cross country skiing.

To share any Hinsdale, NH information with us, please contact us. Learn more about advertising in NHLiving.