Old Man of the Mountain 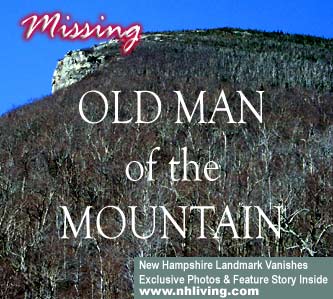 It was like a joke that had no punch line, after standing guard over New Hampshire’s White Mountains for centuries, the Granite states rugged profile is gone.

The Old Man of the Mountain – a jagged, granite profile located in the White Mountain National Park has slid into history as mysteriously as he appeared. Sometime in the late evening of May 2, 2003, or early morning hours of Saturday, May 3, 2003, New Hampshire’s symbol of freedom and independence vanished, the victim no-doubt of a late-spring thaw that loosened the famous profile. The profile was obscured by clouds on Thursday and Friday, so the exact time of the Old Man’s departure is not known.

On Sunday morning, May 4th State of New Hampshire workers could be seen examining the ledges that once were known as “Old Man of the Mountain”. Visitors began arriving at this well-known attraction shortly after sunrise. Some to pray, some to photograph, some to leave a message, and others to see for themselves the departure of what many thought would be a lifelong reminder of New Hampshire. 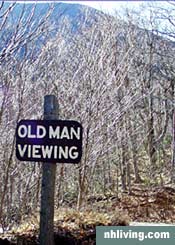 One of New Hampshire’s most-photographed natural wonders, The Old Man of the Mountain has attracted millions of visitors since in the 1800s. The profile was about 1,200 feet above Interstate 93, about 65 miles north of Concord, NH in the White Mountain National Park.


Daniel Webster, a 19th century New Hampshire statesman, once wrote, referring to the Old Man, “In the mountains of New Hampshire, God Almighty has hung out a sign to show that there He makes men.” That symbol is gone but the beauty of this region lives on and his spirit reminds all of us that change is inevitable and often arrives without notice.

The “Old Man of the Mountain” viewing area binoculars now displays a close-up view of a sheer ledge, the “Old Stone Face” configuration of granite gone.